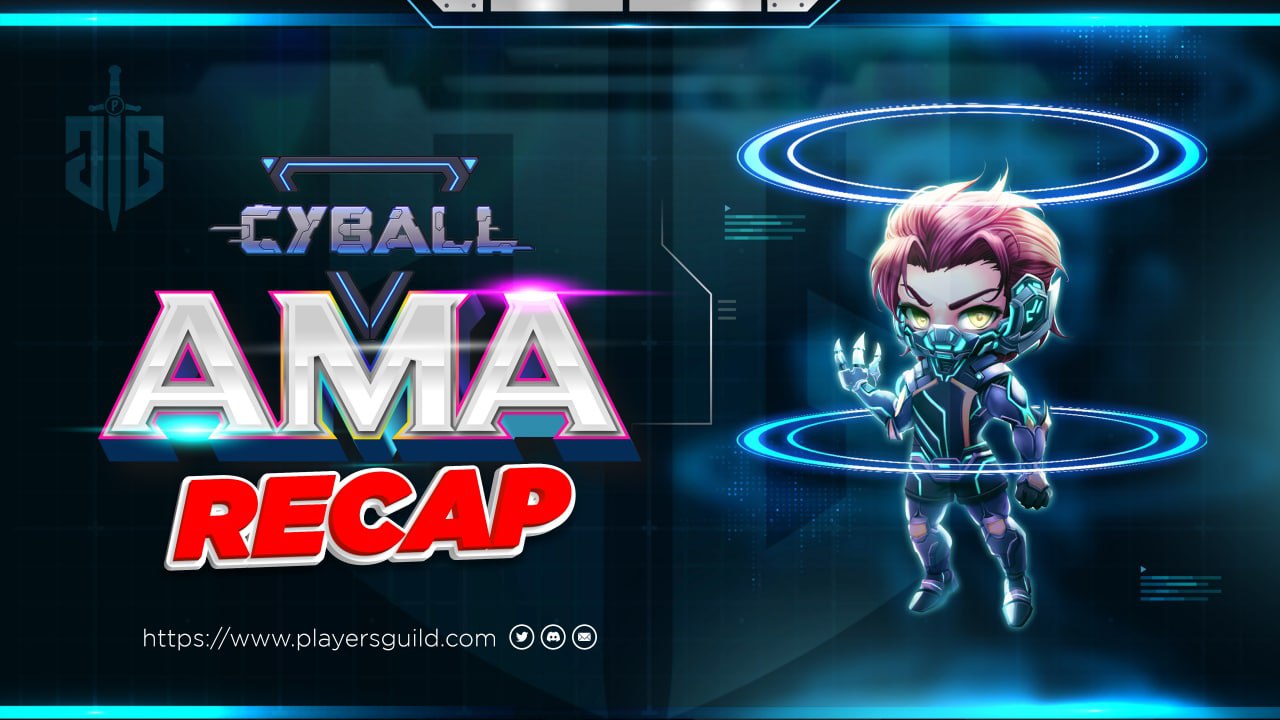 Recap of AMA Session by CYBALL on PlayersGuild’s Discord Channel

PlayersGuild recently hosted Benji, the Co-founder of the promising play-to-earn game Cyball, to an AMA session on its Discord channel. The AMA session took place on February 17th, 2022, and it centred on the origin of the game, as well as its development and future plans. Below is a recap of the major highlight of the session.

Question: As an introductory question, can you tell us who were the first founders and initiators of the idea for this project?

Answer: Early last year, a group of us from Melbourne and a few from Hong Kong got together and conceived the idea for CyBall. This includes Tin, Zeke, Kevin, and Kevin, who collaborated to develop and bring the idea to life. This is where it all began for a small group of us.

Question: Can you tell us when and how the idea for this project came about?

Answer: The concept was conceived early last year, prior to the release of a large number of games. We began to see the beginnings of the blockchain gaming movement and felt compelled to join; there were only about ten or so games available, perhaps fewer, and there was a genuine opportunity to contribute something to the space that was always going to happen. That is a sports-themed game, which is why we began developing CyBall.

Question: We believe that people are curious about who is involved in the execution of this project, their backgrounds, and a brief account of how the team was formed.

Answer: As mentioned in Q1. The founding team is based in Melbourne; we then partnered with the Tomochain team and began expanding the team from there. A sizable portion of the team already had crypto experience from their time together at a venture capital firm, which included a couple of former FTX senior members. The team currently consists of approximately 50-60 individuals who work on our network, some of whom also work on other projects on a part-time basis. We continued to grow the team as we expanded the development team, the art team, and the marketing team. Our business development and partnerships are currently being led by Kevin (a former business development manager at FTX) and Burg (Former Head of Partnerships at FTX)

Question: Did you get inspiration from another project and base your Cyball concepts on it, or did you do something completely different?

Answer: We definitely took inspiration from those games because a large portion of the team were colossal football manager and FIFA fans. We borrowed elements from Pokemon, such as a battle stadium for our PvE mode and a Pokemon centre for our Hire-a-coach mode. Axie infinity, as a card game, and the simplicity of the game's mechanics were also huge inspirations for us.

Question: What is your vision for this project in the future, and what goals do you want to achieve by launching this P2E Game?

Answer: We envision CyBall being played by many guilds and enjoyed by many players all over the world, who may find enjoyment in assembling a team and earning $CBT as they win matches. We hope that CyBall will continue to evolve into a AAA title as we expand our metaverse and build out other features, as well as a CyBall 2.0. Our most important goal is for the community to be able to join us on this journey as we continue to develop a game for the community.

Question: What direction will the gameplay take?

Answer: So, on Tuesday, Feb 2022, the full official version of the game will be released. Its initial release will be a 3v3 turn-based card game in which you can score a goal by winning a key event. There will be six key events in a 3v3 match. In the future, 5v5 will be available in League and Tournament modes.

Question: Is this a time-consuming game, and what distinguishes Cyball from other NFT games? What features draw everyone in and make them fall in love with it?

Answer: The game can take up as much time as the player desires. Thus, it is entirely dependent on the player and the number of matches desired. If a player wishes to remain competitive and improve his or her team, he or she can essentially play the game indefinitely. Cyball features a football theme, which sets it apart from the majority of other P2E games available at the moment. We want to infuse the space with a unique flavour. The competitive aspects of the game make it much more of a social experience, and being able to play with friends and then watch yourself climb the ladder will be both a satisfying feeling and an attractive reward for players.

Question: Is "PvP" the only way for us to earn tokens, or will you include daily quests and other features? For instance, daily quests or PvE.

Answer: That's correct. So far, PvP is the only mode in which you can earn money; however, in future updates, you will be able to earn more money in league and tournament modes than in casual exhibition mode. In the future, we may consider offering a reward for PvE or daily quests. However, the current purpose of PvE is to train your team and gain XP, which makes your team stronger for PvP matches.

Question: You mentioned Cyball tokens in the EcoSystem section of your website; could you please explain them to us more thoroughly?

Answer: The CyBall token, or $CYB, is our governance token, and it will be available after the game is released. Genesis NFT holders and early supporters of the game will be eligible for genesis rewards. Our utility token is $CBT, and it will be used in-game for Hire-a-Coach mode, mentoring of new CyBlocs, and reward distribution.

Question: Token burn is beneficial for any project in controlling the number of token circulation and providing greater incentives to investors. Does Cyball have a plan about token burn?

Answer: Without a doubt. The burning mechanics must be well balanced in relation to the amount of minting that will occur in the game. This is undoubtedly related to the size of the CyBloc population. We will have parameters in place to help pace population growth and prevent it from occurring at a rate that is unmanageable by the ecosystem. We also intend to organise organised burning events on a regular basis to help balance the economy. During this time, we will also be constructing infrastructure to capture the numerous microtransactions that will occur within the game, such as purchasing skins, accessories, supplements, and team boosts. We do this in the hope that the community will continue to enjoy the game and see value in all of the planned upgrades and features.

Question: Can you tell us what we can look forward to on your Road Map?

Answer: Without a doubt. The game will be released next week. That's super exciting, and then in about 4-5 weeks, we'll be launching our Guild Only Tournament, which will feature many big-name guilds as well as some underdogs. The prize at the end is also very appealing. Following that, we will work on adding other features such as our league mode and tournament mode. At that point, we might consider bridging to another chain. Then, as the year comes to a close, we approach the World Cup, which will include a CyBall World Cup. We also plan to expand our metaverse and a slew of potential games based on our IP.

Question: What measures are planned to prevent bots from dominating Cyball?

Answer: So CyBall is a strategy-based game in which you must adapt to each match and how the match is unfolding in order to anticipate your opponent's moves. This is extremely difficult for the bot, and a human player would almost certainly win against a bot in this type of game. Once you reach higher levels of the game, there is a lot more depth and strategy involved.

Question: Which platforms will this football simulation be available on?

Answer: You will be able to play CyBall on Android or any Windows-powered PC. We have immediate plans to expand into IOS and macOS.