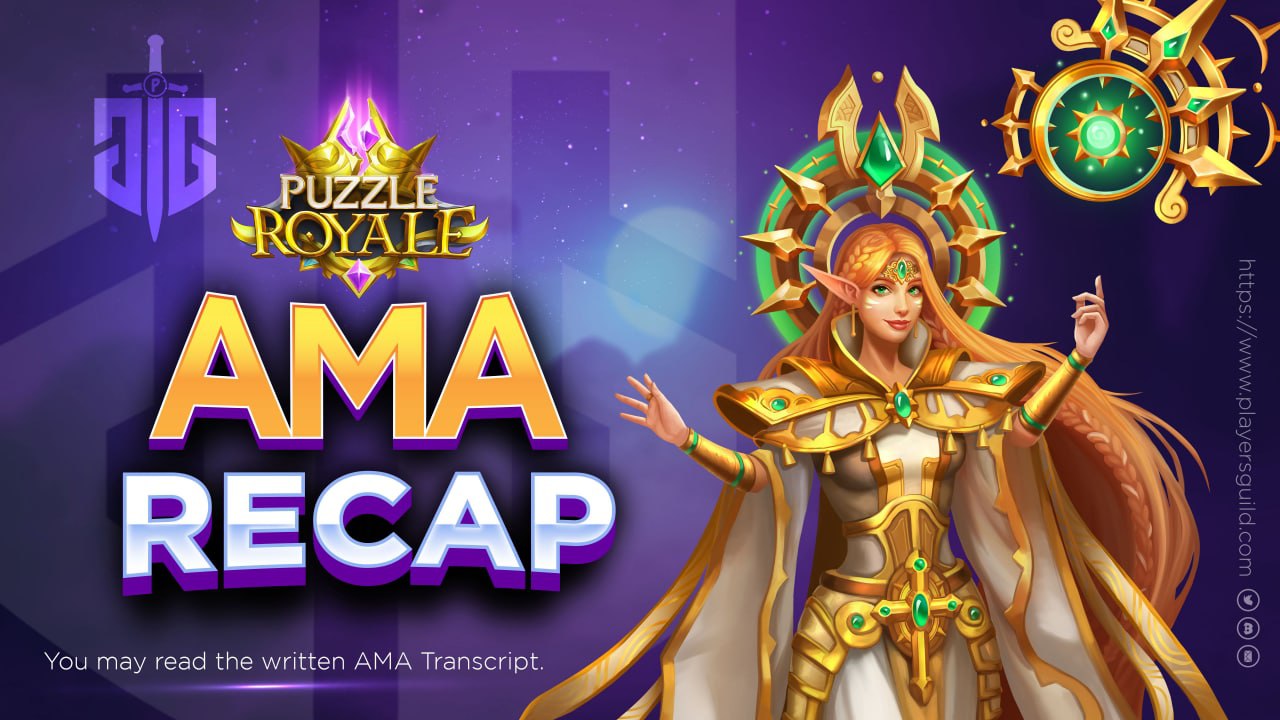 Question: As a first question, to warm up a bit, I would like to start from the very beginning. Who are the foundation and the first initiators of this NFT Project?

Answer: Our core team comprises 5 members with approximately 40 total from around the world, but we're headed by Aaron Yee, our CEO and initial creator of the game. With previous experience at Animoca Brands overseeing the development of other gaming projects. Inspiration for Puzzle Royale is drawn from the addictive tile matching in Candy Crush, RPG elements all combined with P2E mechanics that we’re all familiar with.

Question: How did the process of creating the idea for Puzzle Royal look like?

Answer: So there are a lot of blockchain games being developed as the next WoW with P2E or PUBG with NFTs. We completely believe that is the way forward, but learning from the mobile shift in 2014, adoption is a step-by-step process. Puzzle Royale was created as something traditional mobile gamers would be familiar with, adding in blockchain elements that have been successful. Our team took time to speak to large communities of existing Puzzle RPGs to understand what was missing and how blockchain technology could solve their problems. Fast forward 6 months, we are getting ready for our Alpha.

Question: How did the team expand and who is currently considered key in the realization of the project and if you can briefly say their background, skills, etc...

Answer: So as I mentioned briefly before, our team consists of 5 core members, they are Aaron, Denis, myself (Edi), Nick and Zhimin.

Aaron Yee, the CEO. It’s fair to say he loves games and this is a passion project for him. Being the creator and overseeing the product design he ensures that the gameplay will be fun and engaging whilst is still as accessible as possible. Somehow between being nagged by the rest of the team and his workflow he still manages to squeeze in a game of DOTA every now and then.

Denis Puhleacov is our Chief Development Officer and an early contact of Aaron.

He heads our development team of engineers to build out the vision for Puzzle Royale. It was crucial to the success of the project that experienced individuals are involved, and Denis has past experience with developing a crypto game as well as numerous games on the App Store and Play Store.

About me, Edi... I am the Community Lead. I have always felt a bit awkward writing about myself and find that I derive my sense of belonging from the connections I build with those around me. I am passionate about learning from other people’s stories and walks of life and I think Aaron recognised that in me which is why he thought I’d be a good fit for this role. I initially got into crypto early 2017 and have followed closely the narratives ever since. I have prior experience with community management for another crypto game but have since dedicated myself to Puzzle Royale.

Nick is our Community Ambassador and is a match3 enthusiast who dreams about tile matching in his sleep. He's got years of experience and wads of cash spent on Gems of War. When Nick heard about us and was quick to realize the p2e revolution is the future of gaming. His passion for the game is unmatched which is seen though his YouTube channel and private Discord community which he built himself. One conversation was all it took to see just how much he genuinely cares about the match3 and RPG gaming genres, we knew we had to have him as part of the team.

Zhimin, who is also here with us, is the Marketing Lead. Zhimin brings to the project an undeniable understanding of people. This understanding is what allows him to build rapport quickly and create a narrative that is both true to the product and the values of our users. Previously working together with me on a previous crypto project we committed to Puzzle Royale in similar fashion. It is a lesser known fact Zhimin kept under wraps that he actually has dev capabilities and provides ad hoc assistance to the main development team.

Question: What sets this P2E Project apart from others, what will it contribute to the fast-growing Blockchain Gaming industry?

Answer: Puzzle Royale is aiming to bring a traditional mobile game experience to the P2E ecosystem. The tried and proven genres of Match3(candy crush and bejeweled), Midcore games(Clash of Clans) have continually topped the highest grossing charts on both the app store and google play store.

These feats are only achieved because the gameplay is engaging and accessible. Everyone and their parents can understand what we're about with just one look at the gem board.

We see our offering as a gateway for non-crypto native mobile gamers to enter the space with minimum friction whilst still offering guilds and scholars an engaging way to play-and-earn.

Question: What is your biggest obstacle? Many projects look great only on their Whitepaper & Roadmap but face many difficulties when trying to implement the project mission and end in failure. How does Puzzle Royal overcome every obstacle in its project development?

Answer: That's a good question! We understand just how quickly crypto evolves, and P2E is probably even faster. And we understand the appetite from the ecosystem for new viable offerings.

Time is of the essence so that is why we started building back in August as soon as we realized that P2E was at the forefront of web3 adoption and the opportunity it presented to developing countries.

We understand that there will always be obstacles but believe in informing our community and being open with them is the best way to align expectations. Maybe even incentivizing community members to get involved in the development of the game!

Question: How do you plan to attract NFT Enthusiasts to love your game and enjoy every moment of playing it?

Answer: So in game, as a player plays and matches gems, the NFT hero accumulates mana. This mana enables the player to execute a special elemental attack. A focus for us has been tailoring the feel of the interactions in-game, namely the special attacks.

Different tiers of NFT heroes will result in different animations of their special attacks that are quite obviously more powerful as the tier of the hero goes up.

We've focused on refining the power felt through these attacks and the satisfaction a player gets when dealing a deadly blow to an enemy!

Question: What Game Features await us and how will EcoSystem work and are there any visions for the future as an add-on for them?

Answer: When going through the initial design process the list of game features we came up with were endless! We spent time cutting it down to what was actually achievable given the pacing of the industry.

So for our initial game launch we will have a few game modes that will be available in ‘free-to-play’ as well as ‘play-and-earn’.

The PvE game mode allows players to explore the world of Puzzle Royale by adventuring through the main storyline of the game. Once the storyline is completed they can then move onto the endless PvE mode which pits the player up against randomized enemy hordes through a tower progression system. As they move up the tower the enemy gets stronger. Earning will be available in these modes if the player holds hero NFTs.

The PvP game mode is for when players feel brave enough and want to challenge other players.Players are ranked into leagues according to their Matching Making Rating (MMR), winning a PvP game gains MMR while losing a game loses MMR. PvP is the primary way for the players to earn $PUZZ in the game, with the highest ranked players being able to earn $ROYAL.

Question: You mentioned two tokens on your website, $PUZZ and $ROYAL, so if you could explain more about them?

Puzzle Royale Coin aka $PUZZ is the utility and primary reward token used for our unique NFT Hero summoning and fusing systems. There is no fixed supply of this token and we are going to continue to develop additional burning mechanisms into the game.

Puzzle Royale Crowns aka $ROYAL will serve as our governance token. This governance, utility and special play-and-earn reward token will be fixed in supply and will only be obtained as a reward by the highest tiers of competitive Puzzle Royale players.

Question: The Burn Mechanism is a very important element in Blockchain Games, how do you plan it to function and survive?

Answer: I suppose that this question is the billion dollar question. We are definitely grateful to the pioneers at Sky Mavis with Axie Infinity for paving the way for the p2e ecosystem. It's only true to human nature that we continue to innovate and improve upon previous successes. We know that there is a huge focus on burn mechanisms at the moment and so on launch we plan to have multiple burn mechanisms for both the utility token AND the NFTs.

This will be achieved through our unique summoning and fusing systems that I touched upon briefly earlier. Players will have to spend $PUZZ in order to summon new hero NFTs. We view this system as a breeding 2.0 that allows us more sustainability and control over the ecosystem when compared to traditional breeding.

Additionally, the fusing system allows players a chance at upgrading their team and utilizing any unwanted weaker hero NFTs. 2 hero NFTs are fused together(burned) to potentially return a stronger hero.

Looking forward into the future, we have already started developing a Battle Pass system and a Clan system.

Question: The P2E Games are special because of their model that gives people a chance to make money by playing them. Our question is in what ways can a Puzzle Royal player earn real value assets in the game?

Answer: Earning occurs through playing the game with at least 1 and up to 5 hero NFTs.Although we do have the free-to-play mode, players will not earn in this case.

Future features planned that are p2e are the Clan system coupled with a collaborative Raid Boss mode will also be another avenue of earning tokens whereby players band together to deal as much damage to a boss monster in a limited amount of time. Rewards will be paid out proportional to the teams ranking.

Question: I guess everyone is wondering if there are any potential release dates for the game?

Answer: Yeah of course! We are super excited to launch and will have a pre-alpha test version hopefully out within the next 2 weeks to partners.

We also aim to include feedback from our partners and prove that we are genuinely building with the community in mind.

And most importantly the public sale of the Hero NFTs are slated for the end of March to coincide with Binance Blockchain week as we are built on BSC.

After that the initial game launch will be targeted for the middle of April. So less than 2 months away.